Europe, towards a sustainable transport infrastructure for biodiversity

– For the first time, the European Union is providing €3,000,000 in funding for a project of a strategic nature aimed at committing Europe’s transport infrastructure to a better mainstreaming of biodiversity.
– The BISON project started on January 1, 2021 for a period of 30 months.
– A consortium of 39 members is involved in the BISON project. The partners are representatives of governments, research institutes, companies, and associations.
– The BISON project covers the EU and associated countries and combines in a balanced way the competences related to transport and biodiversity.

In Europe, the need to make infrastructure more sustainable for biodiversity while ensuring its reliability and efficiency is urgent.

Indeed, Europe needs to adapt its existing infrastructure to new climatic conditions (floods, droughts …), as well as find innovative and sustainable solutions to reduce the impact of invasive species and address the decline of native species and ecosystem fragmentation. Simultaneously, the sharp rise in the development of new transport infrastructure, especially in Eastern Europe, must support economic development while paying particular attention to the local biodiversity, which is often endemic.

Faced with these needs, for the first time the European Union funds a 3 million euros coordination and support action project on the topic of transport and biodiversity issues. As part of the last calls under H2020, the BISON project is timely to set the ground and upscale research on these topics in the next European research framework programme 2021-2027 (HORIZON EUROPE).

This project led by a consortium of 39 European members and associated countries aims to tackle the integration of biodiversity in the development of infrastructure, including roads, railways, waterways, airports, ports, or energy transport networks. The BISON project will meet the above aim through the specific objectives below:

– To identify future research and innovation needs for a better integration of biodiversity with infrastructure.
– To identify construction, maintenance and inspection methods and materials which are long-lasting and resilient and can be used by different transport modes to mitigate pressure on biodiversity.
– To support European Member States in fulfilling their international commitments by engaging all stakeholders into biodiversity mainstreaming for infrastructure planning and development.
– To support European Member States in becoming political leaders through collaboration and support of European research 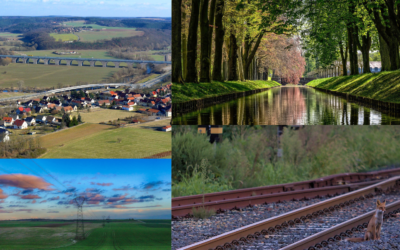 This project has received funding from the European Union’s Horizon 2020 research and innovation programme under grant agreement No 101006661.

We use cookies on our website to give you the most relevant experience by remembering your preferences and repeat visits. By clicking “Accept”, you consent to the use of ALL the cookies.
Cookie settingsRead MoreRejectAccept
Manage consent

This website uses cookies to improve your experience while you navigate through the website. Out of these, the cookies that are categorized as necessary are stored on your browser as they are essential for the working of basic functionalities of the website. We also use third-party cookies that help us analyze and understand how you use this website. These cookies will be stored in your browser only with your consent. You also have the option to opt-out of these cookies. But opting out of some of these cookies may affect your browsing experience.
Necessary Always Enabled
Necessary cookies are absolutely essential for the website to function properly. This category only includes cookies that ensures basic functionalities and security features of the website. These cookies do not store any personal information.
Functional
Functional cookies help to perform certain functionalities like sharing the content of the website on social media platforms, collect feedbacks, and other third-party features.
Performance
Performance cookies are used to understand and analyze the key performance indexes of the website which helps in delivering a better user experience for the visitors.
Analytics
Analytical cookies are used to understand how visitors interact with the website. These cookies help provide information on metrics the number of visitors, bounce rate, traffic source, etc.
Advertisement
Advertisement cookies are used to provide visitors with relevant ads and marketing campaigns. These cookies track visitors across websites and collect information to provide customized ads.
Others
Other uncategorized cookies are those that are being analyzed and have not been classified into a category as yet.
SAVE & ACCEPT
Powered by

An email with a confirmation link has been sent. Please click this link to confirm your subscription.